The publisher didn't much care for this image, but I liked the initial sketch and thought it fit the pulp fiction vibe. I wanted it to look as though it might have been on a shelf somewhere, well-read and a little beat up. They finally agreed. Plus, the whole story is right there on the cover: 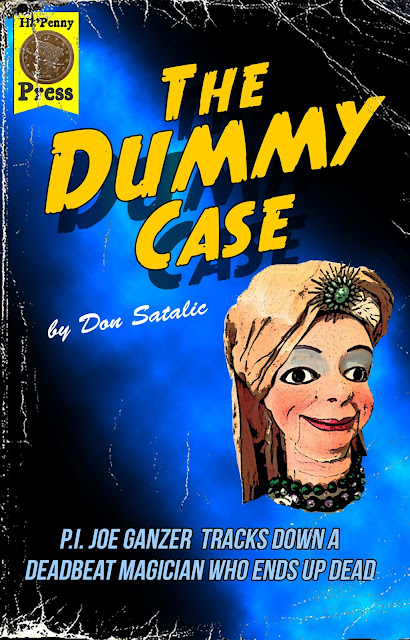 The back cover continues that theme and gives some (but not all) of the details. 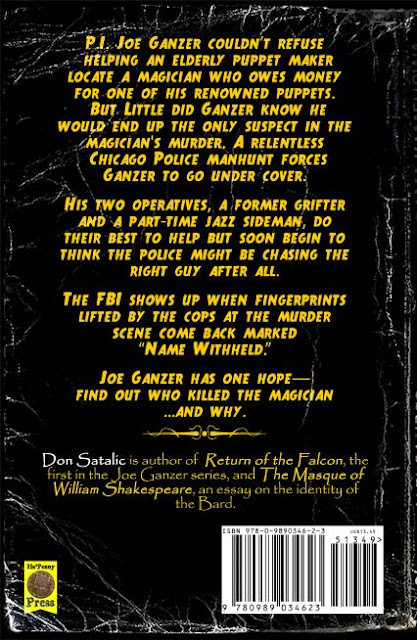 We are looking at a mid-May release. The ebook edition (which comes FREE with the paperback) includes the entire 1931 catalog of Frank Marshall, the real-life puppet maker fictionalized in The Dummy Case.  Both editions include his biography, as well as the biography of famous ventriloquist Jimmy Nelson, also a character in this story.

Pre-orders will be available soon wherever books and ebooks are sold. 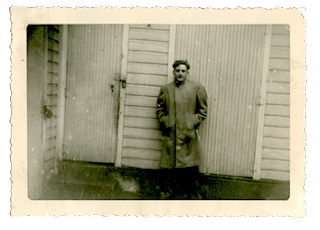 When the Japanese bombed Pearl Harbor, my dad immediately went to sign up with the Marines. They rejected him. Then he went to the Army, Navy, Air Force, even the Merchant Marines. Every one rejected him. He was branded 4F because of a heart murmur. My Aunt Wilma told me some years after he died in 1995, "Your dad felt so bad, so dejected back then. He just left our home in Chicago and started roaming." Where he ended up would change the outcome of the war.

As all his friends went off to war, my dad began “booming” around the country, working at the same trade his father Sam Satalic (81552*) knew— ironwork, the skywalkers.  His path eventually led him to a sleepy little area known as Oak Ridge, Tennessee, a place that would forever change the world. But at the time, he wrote back home to his sister (my Aunt Wilma):  “It’s just me and bunch of old men down here.”

At Oak Ridge, he was a top connector, an aerial acrobat risking life and limb bolting the steel structures together. This was no ordinary place, and these were no ordinary structures. Oak Ridge has been called the greatest industrial project in the history of the world. They were going to produce the crucial material for the world’s most fearsome weapon here—the Atomic Bomb. Because of security, my dad had to live on site in barracks, like any other soldier.  The place was so secret even Vice President Truman did not know of its existence until after President Roosevelt had died. They called it the “Secret City,” and it had to be built on time because the Nazis were racing toward their own bomb and an invasion of Japan was looming.

My dad and those crews fought hard against the clock and finished way ahead of schedule. When completed, they were the largest buildings on earth. In them, they produced the high-grade elements necessary for the atomic bomb named “Little Boy.” Germany yielded before it was needed, but not so the Japanese. After they dropped the bombs, the Japanese finally surrendered, and perhaps as many as a million American soldiers came home instead of being slaughtered on the Japanese mainland.

My dad’s iron-working tools, his spuds and sleever bar, became his weapons, more powerful than any rifle he could have ever carried. He never talked about the war years. Like so many others from that generation at Oak Ridge, my dad was one of our unknown soldiers, a truly extraordinary hero.


My dad died in 1995 from mesothelioma, a work-related lung cancer suffered by many ironworkers.
Although I am a writer, I am also a third generation iron worker  and member of  Chicago's Local 1, along with my brother, Anthony Satalic.


Author's Note—  I opened Return of the Falcon (one of my Joe Ganzer
mystery novels) to honor my dad:

Return of the Falcon 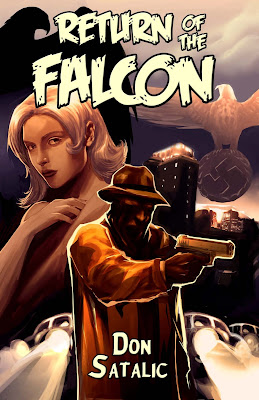 The year is 1946. Chicago private eye Joe Ganzer, a haunted former WWII espionage agent, is about to take a case he doesn't want from a mysterious Russian beauty he doesn't trust to locate an uncle whose story he doesn't believe. And a friend from his past, a two-time loser, will ask Joe to get him out of a treacherous jam. If he helps him, they may both end up dead. Dark days are about to descend on Joe Ganzer. He will become tangled in a web of espionage and stolen booze and stolen art and murder-- and he will come face to face with the legendary Maltese Falcon.


"Return of the Falcon"
Available
Amazon.com (Kindle)
and
Smashwords.com (Most e-Readers)

Posted by Satalic at 9:30 AM No comments:


Clement Clarke Moore probably didn't write it  (just like Shakespeare probably didn't write all those plays).  Literary sleuth Donald Foster investigated the Christmas poem and decided that Moore was lying. Foster found out that it was first published as "A Visit From St. Nicholas," probably by an amateur poet named Henry Livingston, Jr. of Poughkeepsie, NY in a newspaper in Troy, NY, in 1825.

Foster believes the style and cultural references are from Livingston (certainly not Moore), plus Moore didn't lay claim to the poem until 1844--after Livingston was dead--and a full 19 years after it first appeared in the Troy newspaper. Moore even asked the Troy paper if anyone remembered who wrote the poem. The Troy paper answered that anyone who knew was probably long gone.


**Click either of the last two links to read an excerpt.**

10 Reasons Why William Shakespeare is a Fraud

Read The Masque of William Shakespeare on Kindle or any other e-Reader at Smashwords.

Posted by Satalic at 6:07 PM No comments:

Bruce Longworth, head of the performance program at Webster University's Conservatory of Theatre Arts, who has directed the Shakespeare Festival St. Louis' Kevin Kline-winning production of "Hamlet" in 2010, had this to say:

"Here's what I find troubling: the idea that Shakespeare had to be a nobleman with a university education. Education has never equated with imagination. If something happened to the Earl of Oxford (on a ship, similar to an episode in "Hamlet") — well, news got around. Maybe Shakespeare heard about it and used it; he was a magpie. Besides, Oxford had his own theater. Why wouldn't he give the plays to it?"

Read The Masque of William Shakespeare on Kindle or any other e-Reader at Smashwords.
Posted by Satalic at 5:01 PM No comments:

ANONYMOUS is a Tudor turkey!

That's what they're saying in the UK at Mail Online, giving it only one star. Why? The film presents a ludicrous premise that is unsupported by history. The reviewer says Anonymous is preposterous.

But so is William Shakespoeare, the writer. The real William Shakespeare had little or no education and never even owned a book. That's where the movie got it right--Shakespeare was most likely an illiterate baffoon. Common sense would say that the author of the greatest literature in English history needed a little education and surely should own a book or two. Doubts about Shakespeare have been expressed by Mark Twain and Sigmund Freud, to name only a few.


The Masque of William Shakespeare is available on Kindle and all other formats (IPad, Sony, Nook, amd most e-reading apps) at Smashwords.
Posted by Satalic at 9:55 AM No comments:

I'm from Chicago. I love its people and its inspiring, flamboyant, and often violent history. Sandburg called it "City of the Big Shoulders," a working man's town. Nelson Algren wrote: "It's always been an artist's town and it's always been a torpedo's town...."

My stories take place in this Windy City. The latest is THE DUMMY CASE, the next Joe Ganzer mystery. My previous novel RETURN OF THE FALCON is a mystery/thriller set in 1946, Chicago, London, and Montréal.

In non-fiction, I had great fun writing THE MASQUE OF WILLIAM SHAKESPEARE about the identity of the Bard and came to a startling conclusion.

I'm currently working on a prequel to RETURN OF THE FALCON, which follows Joe Ganzer in his exploits during World War II as an OSS Intelligence Agent.